Last year Kashima Antlers announced the commercialisation of the Turf Project. This is the practical application of the plentiful experience gained of the latest technology in maintenance methods from a joint effort carried out since 2011 with Sony and the turf management company IGM.

Evergreen sports turf is required as a stipulation of participation in the J.League, and the required evergreen turf for competition is of a high quality. This is known as ‘sports turf', and it is placed under harsher demands than that which is used in parks or for horticulture, not only in terms of the toughness of the grass on display, quality of drainage, and ability to avoid becoming worn out, but an all-over quality is demanded of the roadbed as well. Similarly to many other venues, Kashima Stadium has had problems with regards to the playing surface. The key cause of this is the lack of sunlight and changes in climate brought about by heat-waves. The duration of sunlight that is indispensable for turf's growth may be insufficient depending on the weather, or heat-waves may cause damage to the turf. In addition, the steep stand creates shade, leaving an area with a chronic shortage of sunlight. In order for the players to play high level games throughout the year, care and preservation of sports turf must take priority, which could lead to a lower operation rate.

With these circumstances in mind, in 2017 the J.League accepted the use of hybrid turf, already widely used elsewhere around the world, as part of standard stadium reforms. Hybrid turf is a combination of natural and artificial turf, and if the pitch as a whole has natural turf and less than five percent artificial turf it is classed as hybrid. Alongside this, last year the J.League board of directors approved Noevir Stadium Kobe to lay hybrid turf on the pitch. “As a result of the hybrid turf field test at the stadium (off the pitch), in terms of safety and quality hybrid turf was equivalent to that of natural turf,” the J.League surmised of the hybrid test at Noevir Stadium Kobe. “Furthermore, a key factor behind the success of this experiment was obtaining an environment capable of nurturing natural turf, on account of the growing lights and ground temperature control systems.” Yokohama's Nissan Stadium also laid a carpet style hybrid turf, with players responding favourably after playing on it.

In Europe, too, famous venues such Emirates Stadium, Old Trafford, and Camp Nou have adopted hybrid turf, and while it is now beginning to be laid in Japan as well Executive Officer and Commercial Director Hideki Suzuki insists Antlers will, “be fixated on natural turf until the very end”. When announcing the commercialisation of the Turf Project last year it was disclosed that an environmental compatability verficiation test had shown the new variety of turf had succeeded in soil considered hostile.

Until now in northern Japan the type of grass used in order to adhere to the evergreen demand was a cool season variety. However, this type requires time to grow from germination and struggles in the heat of the summer, soon becoming damaged. Previously Kashima Soccer Stadium had used a mixed variety of cool season type Kentucky Blue Grass, Texas Blue Grass, and Tall Fescue, but the new breed developed is a warm season type which underwent a verification test in which it of course excelled at dealing with warm weather but also didn't compare unfavourably to the previously used cool season variety when it came to coping in shady or even cool conditions.

In addition, in order to maintain it as evergreen a balloon heatretention system sheet has been developed alongside an already-existing under-heating system, making it possible to have evergreen turf all year round. Also, as part of the day-today management, the innovative ‘BRIGHTURF' technology devised in part by Sony Business Solutions was also introduced in order to bring about the partial restoration of grass damaged by lack of sunlight and enable year-round use. Furthermore, the previous method of replacing the entire field took several months but by rolling up turf cured on fields and then carrying out a full-scale replacement using the ‘Big Roll' method, which spreads the rolled-up turf in the stadium over a period of 70 hours, the time until the pitch can be used was shortened to 21 days in total.

Through this kind of initiative Kashima Stadium is aiming for innovation in the sporting world, and it offers huge potential to erase the issues with pitch management at stadiums and grounds all around Japan. Antlers are aiming towards this future, and will keep proceeding in this manner.
Steps in the Turf Project
Six Years of Development and Implementation, Arrival at Commercialisation 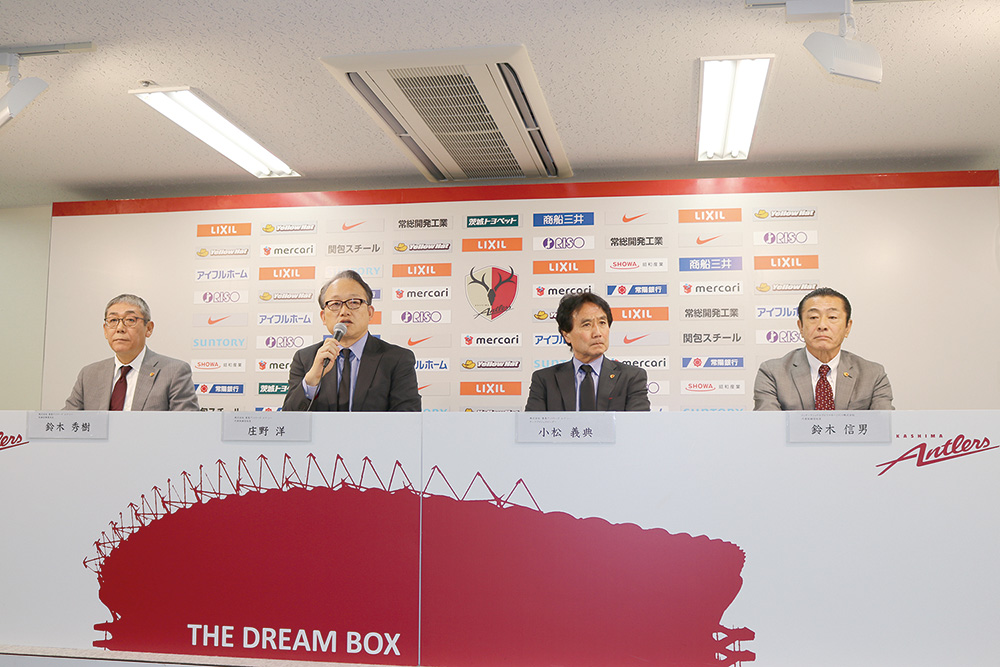 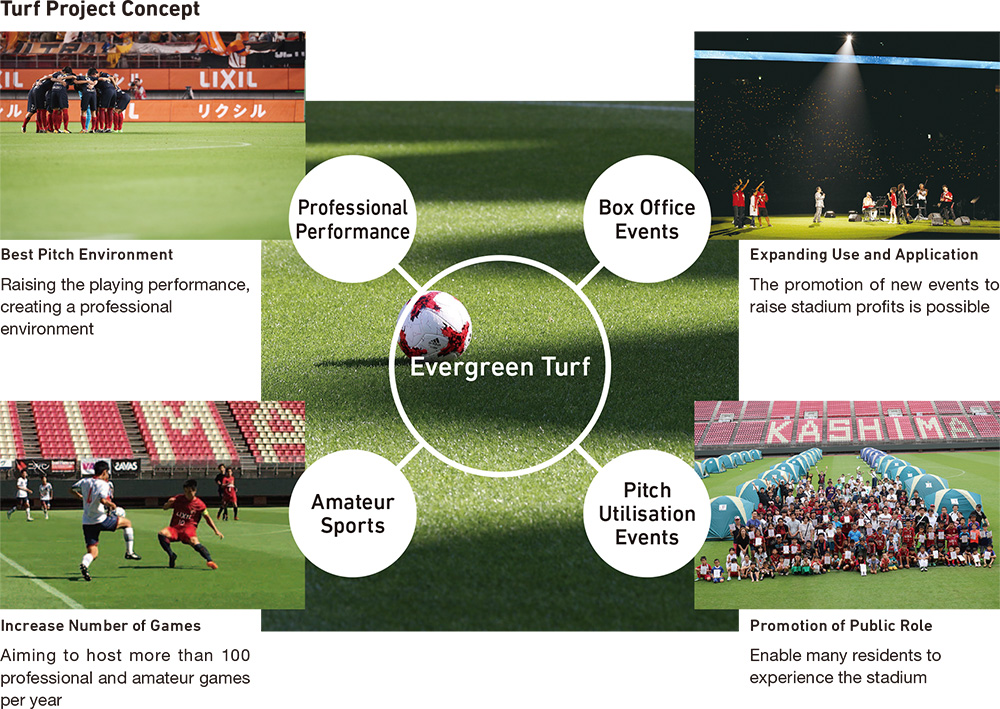